The B.Q.E. Is Crumbling. There’s Still No Plan to Fix It. – The New York Times 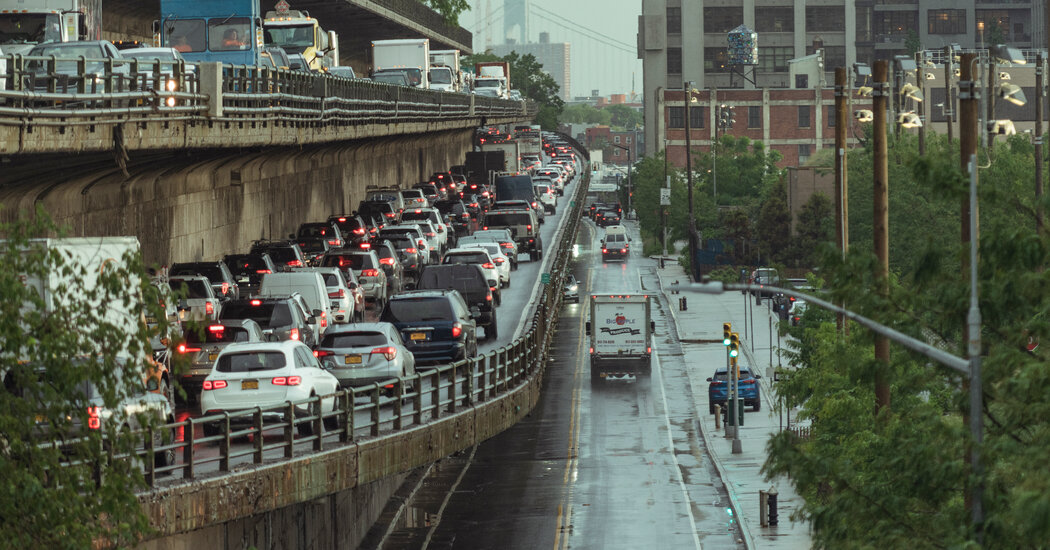 The B.Q.E. Is Crumbling. There’s Still No Plan to Fix It. – The New York Times

Mayor Eric Adams wants to jump-start the project, but some critics have raised safety concerns.

The Brooklyn-Queens Expressway is slowly crumbling from the road salt and moisture that has weakened its concrete-and-steel foundation, and from all the overweight trucks that it was never designed to carry.

But six years after New York City officials sounded the alarm over the B.Q.E., there is still no consensus about what to do with this vital but outdated highway from the 1940s, which carries 129,000 vehicles a day.

At least a half-dozen plans have been floated, fractious public meetings and rallies have been held and a mayoral panel of experts worked for more than a year to come up with more options.

“It’s been a lot of effort just trying not to make things worse, but we haven’t been able to make it better,” said Jake Brooks, 47, a law professor, whose apartment building sits beside the B.Q.E. and shakes from the vibrations of cars and trucks hitting potholes and bumps.

Now, the saga of the B.Q.E. is taking another turn as Mayor Eric Adams aims to start construction within five years on a yet-to-be-developed plan to fix the highway. That upends a proposal made in 2021 by Mr. Adams’s predecessor, Bill de Blasio, to temporarily shore up the highway for 20 years at a cost of more than $500 million to give the city more time to work out a permanent solution.

“Our moment is right now,” Mr. Adams said in a statement. “I will not wait decades and needlessly spend hundreds of millions of additional taxpayer dollars when we can and must start rebuilding this vital transportation artery today.”

Fast-tracking the project, the mayor added, will allow the city to potentially tap into billions in new federal infrastructure funds that were unlocked by the Biden administration and use them to help pay for one of the city’s most expensive transportation projects. Under federal legislation passed last year, cities can apply for grants each year until 2026.

“We have a once-in-a-generation opportunity to access the federal funding necessary to reimagine and rebuild the B.Q.E. that a post-pandemic economy and city demand, and we are seizing it,” Mr. Adams said.

The mayor — who has a closer working relationship with Gov. Kathy Hochul than Mr. de Blasio did with former Gov. Andrew M. Cuomo — is also in “active discussions” with state officials about overhauling the entire highway, which runs about 18 miles, instead of focusing on just the 1.5-mile section that the city controls, city officials said.

But some elected officials, community leaders and residents have questioned whether the city really can implement a new plan in just five years and have expressed concerns about cutting back on extensive repairs to shore up the existing structure in the meantime.

“There are no easy solutions; if there were, we would have done it many years ago,” said Brooklyn city councilman Lincoln Restler, who has criticized the Adams administration for not aggressively carrying out repairs. “This has been kicked down the road because it is so hard.”

Hank Gutman, a former transportation commissioner under Mr. de Blasio who was a member of the B.Q.E. panel, said it was “wishful thinking” to believe a new plan could be adopted, approved and built before the structure becomes unsafe. “They have run out of time and options without employing the measures that we announced and adopted last year,” he said.

The B.Q.E. was built in sections between 1944 and 1948 during the era of Robert Moses, the influential planner who expanded the city’s roadways. Long known for narrow lanes and potholes, the highway also has a cherished feature: a pedestrian promenade in Brooklyn Heights with sweeping views of the Manhattan skyline that is suspended over traffic by an unusual triple cantilever structure.

The roadway is supported by steel rebars inside concrete. They are corroding from road salt that seeped in through cracks, which have widened from freezing and thawing and moisture.

In 2016, city officials announced they would rehabilitate the 1.5-mile section between Atlantic Avenue and Sands Street in Brooklyn, warning that if nothing was done, they would have to restrict trucks by 2026 to reduce the weight on the highway.

The B.Q.E. panel later concluded the highway was deteriorating even faster, in part because of all the trucks exceeding the 40-ton federal weight limit. At the panel’s urging, two of the six lanes were eliminated last August, which has reduced vehicle traffic.

In 2018, city officials presented two options to rebuild the highway, which were rejected by critics, including Mr. Adams, then the Brooklyn borough president. One plan called for closing the Brooklyn Heights promenade for up to six years and erecting a temporary highway over it to redirect traffic while work occurred below.

Many of these critics envisioned a city with fewer cars and saw the B.Q.E. overhaul as an opportunity to do something about the worsening traffic that has choked neighborhoods with gridlock and pollution and made streets more dangerous for pedestrians and cyclists.

Counterproposals were floated. The City Council weighed in with an $11 billion plan to tear down the highway and replace it with a three-mile-long tunnel. Scott Stringer, the former city comptroller, proposed limiting part of the highway to trucks and converting another part into a two-mile-long park.

There will be no consensus on the B.Q.E., said Samuel I. Schwartz, a transportation engineer who has worked on the highway. He recommended that Mr. Adams and Ms. Hochul just set a deadline to come up with a new plan — and then move ahead with it over almost certain opposition.

“The city and state have to be together on this,” he said. “If they’re willing to commit to a decision one year from now, then it’s a good plan.”

Hazel Crampton-Hays, a spokeswoman for the governor, said, “The state is ready to support the city on the rehabilitation project, including by securing federal infrastructure funding.”

City officials said they will continue making necessary highway repairs, including some laid out in Mr. de Blasio’s 20-year plan. They have set aside $100 million for a dedicated contractor to make repairs identified by regular inspections. Sensors were also installed on the cantilever last year to monitor its vibrations and movements.

Next year, the city will begin rebuilding parts of two deteriorating bridge sections near Grace Court and Clark Street in Brooklyn, which will allow restrictions on trucks to be delayed until 2028. An automated ticketing system to enforce truck weight limits is to go into operation early next year.

Because Mr. Adams wants to initiate a more permanent fix to the B.Q.E. within five years and is committed to current expressway repairs, city officials said that longer-term repairs, like extensive work on bridge decks and joints, will no longer be necessary.

But in recent months, many community leaders and residents have grown increasingly frustrated and concerned over what they see as the city’s lack of transparency and urgency about the expressway.

Pia Scala-Zankel, a writer whose family’s brownstone in Brooklyn Heights overlooks a section of the expressway, said that she has not seen any repairs being made below her home over the past year. She has repeatedly asked the city transportation agency for an update on the repairs, but has heard nothing. “It’s like a slap in the face,” she said.

Mr. Restler, the city councilman, said that any B.Q.E. plan would require “a meaningful degree of community consensus,” given the complex governmental approvals and environmental reviews required. “No plan can be shoved down our throats by City Hall or anyone else,” he said.

Administration officials said they have been taking time to review the B.Q.E. project and will commence public meetings this month to work with the community on a new expedited plan.

Lara Birnback, the executive director of the Brooklyn Heights Association, a leading neighborhood voice, said that local residents and drivers would welcome a plan sooner rather than later, though she noted, “There are so many caveats and ifs there — all of the pieces would have to line up in the right way for that to be feasible.”

She added that many in the community hope the city will do more than simply patch up the aging highway.

“We’ve moved beyond that,” she said. “People would be upset not to see something more transformative, more green and more 21st century.”