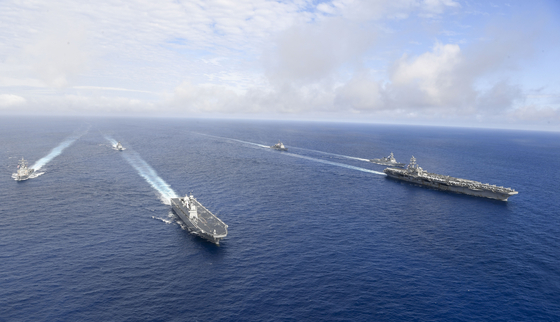 
South Korea, the United States and Japan will conduct a combined missile detection and tracking exercise near Hawaii in August to guard against North Korean missiles, according to South Korean defense officials Tuesday.

The combined drills, known as the Pacific Dragon exercise, have taken place every two years. The South Korean Navy participated in the exercise in 2018 and 2020, but the Moon Jae-in administration did not disclose details of the drills at the time.

South Korea’s decision to participate again in the biennial exercise — and be more open about it — comes after the three countries’ defense chiefs met on the sidelines of the Asia Security Summit, also known as the Shangri-La Dialogue, in Singapore over the weekend and agreed to regularize and conduct the drill publicly.

The missile tracking drills represent trilateral security cooperation between Washington, Seoul and Tokyo amid tensions caused by Pyongyang’s 18 missile tests this year and speculation that it could conduct a nuclear weapons test in coming weeks

According to defense officials who spoke on condition of anonymity on Tuesday, Australia will also participate in Pacific Dragon. Canada, which is a member of the Five Eyes program along with Australia, is also likely to participate.

Pacific Dragon will begin toward the end of this year’s multinational Rim of Pacific Exercise (Rimpac), which focuses on improving tactical and technical coordination among its participants, including the detection, tracking and reporting of ballistic missile targets.

Rimpac is scheduled to run from June 29 to Aug. 4.

The dates for Pacific Dragon are Aug. 1 to 14, but there is a possibility they could change depending on weather or other contingencies.

In addition to the missile tracking exercise, Seoul, Washington and Tokyo are expected to conduct their quarterly combined missile warning drills later this year.

The announcement of joint ballistic missile detection drills by the three countries came as the North revived its use of the term “confrontational struggle” to describe its approach to external relations, and leader Kim Jong-un called for stronger “self-defense” measures to tackle “very serious” security challenges during a key ruling Workers’ Party meeting last week.

Continuing missile and nuclear threats from North Korea have prompted the South to draw closer to the United States and even Japan, despite a succession of diplomatic spats with the latter.

While Defense Minister Lee Jong-sup acknowledged in Singapore on Sunday in a speech at the Shangri-la Dialogue that the two countries had “unresolved issues” stemming from Japan’s colonial rule, he said Seoul wants “the two sides to put their wisdom together to reach reasonable solutions in a way that is in line with shared interests.”