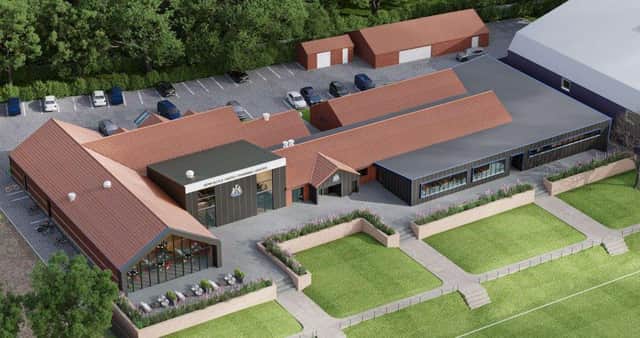 Before the final ball had been kicked last season, builders had already moved on to the 23-hectare site to start the groundwork for the single-storey extension to the building.

The training ground, built two decades ago, was mocked during Mike Ashley’s time as owner after players during one pre-season were photographed cooling down in paddling pools and taking ice baths in wheelie bins.

“The current training facilities fall significantly below the Premier League, and perhaps even Championship, standards.

“As part of the continued efforts of NUFC to improve the facilities and environment for its players, and staff working on site, in the short term the club is looking to invest in redeveloping the current first team training ground by bringing it in line with other Premier League clubs and standards.”

“It’s hugely important for us,” said Howe. “I think you’re day-to-day environment is important now we’re trying to attract world-class players to the club, and, in doing so, you need to give them an environment which matches their status.

“I think the grass and the playing facilities are excellent here, but the building itself definitely needs updating.”

In the meantime, the extension, and internal renovations, will improve the day-to-day experience for players and staff.

The entrance to Newcastle United’s training ground in 2020.

It’s now “lighter and brighter”, and there are motivational messages dotted around the white walls.

“We’ve tried to just create an environment that was a little bit more welcoming, really,” said Howe. “We’ve made subtle changes to the training ground. There are limited things you can do when structurally you can’t change, but you can maybe change the look and feel of it.

“A lick of paint here and there, new carpets – that’s obviously the furnishings side – but then some messages.

“We’ve changed some key things that the players see as they walk around the building just to try to make sure every space is utilised in a positive way, because you’ve got to remember the amount of time the players spend here is extreme.

Howe wanted to give the players a glimpse into the future of the club, which has ambitions to challenge for European football and trophies over the coming seasons.

“We’ve just tried to show them that the club is going to change in a positive way for them, so they’re going to have hopefully a better experience here,” said Howe.

“Now as I said, we can’t do that structurally, and make the big changes that maybe we’d want to, but we can do it in subtle ways knowing that there’s more to come, and that’s what we’ve tried to do, just give them a taste that the club is going to move in a different direction.”

Asked about the differences, Howe said: “Just from the things that I said. It’s brighter, it’s lighter.”

Arguably, one of the most significant changes is the addition of a hydro pool to aid the recovery of injured players.

The application shows the pools used by Manchester City and Chelsea. It reads: “The HydroWorx 2000 Series pool technology is a quantum leap forward in aquatic therapy and fitness.”

Other changes are more subtle. The players will have a new changing room and a bigger lounge area, and the internal layout, offices and suites will be reconfigured to create a better working environment for playing and non-playing staff.

A bigger canteen and new kitchen is proposed along with reconfigured areas for the doctor, physios and sports science team.

The application states: “NUFC need training facilities which are designed and caters for the wellbeing of their players and staff and hope to do so by supplying an interactive, light, and useable space.

“The proposed extensions and renovations aim to … reorganise the building programme in a far more efficient and logical manner.

The club had wanted to take advantage of the summer break to get as much work done as possible before the players report back for the start of pre-season training on July 1.

However, the planning process takes time, and there will, inevitably, be some disruption next season.

“Fingers crossed everything goes smoothly, and we can make those adjustments during the summer with a longer-term plan of moving training ground,” said Howe. “Certainly, ambitious plans, but it’s what the club needs to sustain where the club wants to go in the future.”