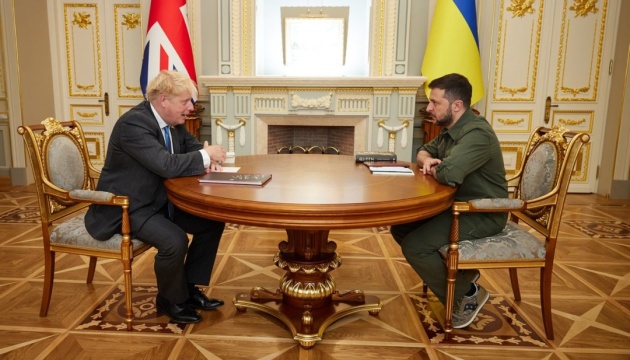 British Prime Minister Boris Johnson during his visit to Kyiv proposed launching a major training operation for Ukrainian troops with the potential to train up to 10,000 soldiers every 120 days.

The UK government said this in a statement on Friday, Ukrinform reports.

“As Ukrainian soldiers fire UK missiles in defense of your nation’s sovereignty, they do so also in defense of the very freedoms we take for granted. That is why I have offered President Zelensky a major new military training program that could change the equation of this war – harnessing that most powerful of forces, the Ukrainian determination to win,” Johnson said.

The UK-led program would train and drill the Armed Forces of Ukraine using battle-proven British Army expertise, allowing them to accelerate their deployment, rebuild their forces, and scale-up their resistance as they continue to defend their nation’s sovereignty against Russian invaders. International partners would be invited to host the program, if the offer is accepted by Ukraine.

According to the statement, the previous Operation Orbital saw the UK train more than 22,000 Ukrainian personnel from 2015 until the full-scale invasion of Ukraine. The new program would train forces outside of the country.

The UK government also noted that the battle-winning skills taught during the seven-year program enabled Ukrainian forces to launch a ferocious defense against Russia’s illegal and unprovoked invasion.

It is expected that each soldier would spend three weeks on the training course, learning battle winning skills for the front line, as well as basic medical training, cyber-security and counter explosive tactics.

According to the UK government, alongside the training offer, the leaders also discussed how the UK can play a pivotal role in ending the blockade of grain.

On June 17, Johnson paid a working visit to Kyiv for the second time since the start of Russia’s all-out invasion of Ukraine. He met with President Volodymyr Zelensky. Zelensky and Johnson made a joint statement after the meeting.