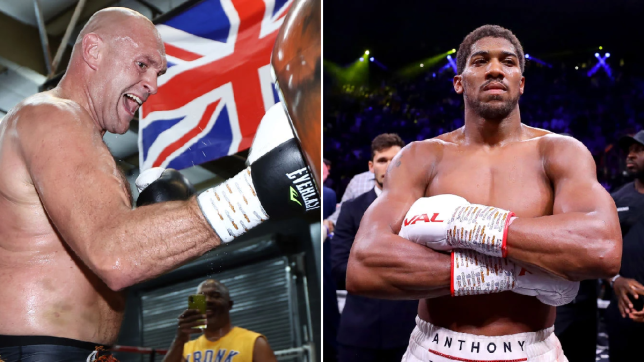 John Fury believes a long-awaited showdown against Anthony Joshua is the only fight that will tempt Tyson Fury out of retirement, revealing his son ‘is still obsessed’ with training.

Fury has remained adamant that his boxing days are behind him after vowing to walk away from the sport to spend more time with his family following his knockout win over Dillian Whyte in April.

Many in boxing believe the 33-year-old, who still holds the WBC heavyweight title, will be tempted back to fight the winner of Oleksandr Usyk vs Joshua, who will meet in their rematch in August with the Ukrainian’s IBF, WBO and WBA titles on the line.

Fury was last week forced to dismiss reports claiming he is already in negotiations to fight the winner of that contest in Saudi Arabia later this year.

And according to his father John, ‘The Gypsy King’ will stay happily retired if Joshua fails to beat Usyk this summer.

Asked if it is just Joshua who can lure Tyson back, John Fury told Metro.co.uk courtesy of FreeBets: ‘Yes. Nobody else will.’

He continued: ‘To be honest with you, he’s never come out the gym. He’s obsessed with training at the moment, twice a day, every day. I’ve been participating in some of it myself.

‘He enjoys training, the pressure is off and he loves the gym life. He’s turned into a gym rat basically. It’s funny to see but he is.

‘He’s super fit and he’s enjoying his time out the ring. Whether it’s going to be permanent or not, it’s up to him. He says he’s retired but you never know with Tyson.

‘He’s training very hard for a retired man in my book. But that’s up to him, we’ll see in the future.’

Joshua suffered the second defeat of his professional career against Usyk last September, outboxed by the brilliant Ukrainian at the Tottenham Hotspur Stadium.

Joshua’s game plan was widely criticised that night after he was unable to put his considerable size and strength advantages to good use, picked off by the smaller man who almost found the stoppage win himself in the final round.

Since then, Joshua has made major changes to his team with Rob McCracken, his trainer since the day he turned professional, moving on. Angel Fernandez has since stepped up to take the reins with Robert Garcia also joining the camp ahead of the rematch.

While Joshua fell short last September, Usyk was still ‘smashed to bits’ according to Fury, who believes the Briton’s camp will make the necessary adjustments to ensure history doesn’t repeat itself.

‘He’s a big strong guy and it was only a game plan that let him down last time and Usyk, even though he got the decision, he knew he was in a fight. He was smashed to bits was Usyk,’ Fury said.

‘So, all AJ has to do is tweak a few things and sheer size and power wins. He needs to get his mind right though as that’s the key to unlocking it all. I believe he can do it.

‘He’s got a funny way of doing things. He beat Ruiz in Saudi on the return so why not? If anyone’s capable its AJ. I hope he does win and who knows, a fight against him might just tempt Tyson.

‘I’ll be watching that. It’s good to see a fellow Brit trying to climb a mountain. It is a mountain for AJ. It’s an Everest for him, but I think he can do it. If he gets the right kind of training, the right kind of game plan together, why not? Good luck to him, I hope he makes it.’

John Fury is a brand ambassador for FreeBets.com

MORE : ‘Biggest load of rubbish ever!’ – Tyson Fury slams reports he is in negotiations to fight Anthony Joshua vs Oleksandr Uyk winner

MORE : Tyson Fury in talks to fight winner of Anthony Joshua vs Oleksandr Usyk in Saudi Arabia days before the World Cup final

For more stories like this, check our sport page.