‘It looks like normal Rafa! ‘ – Nadal proves his fitness in routine win over Wawrinka – sportsmax. tv 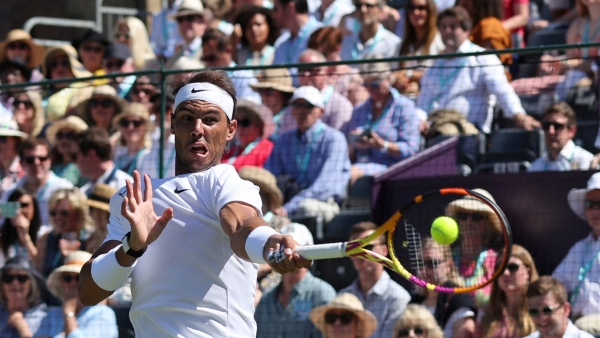 ‘It looks like normal Rafa! ‘ – Nadal proves his fitness in routine win over Wawrinka – sportsmax. tv

The calendar Grand Slam remains a “realistic goal” for Rafael Nadal, but he will not lose sleep over the holy grail in tennis as he prepares for Wimbledon.

That is the message from Carlos Moya, who is a former world number one and has coached Nadal since 2016.

Nadal made an incredible comeback at the start of 2022 from a foot injury that has plagued much of his career, winning the Australian Open before claiming another French Open crown.

Nadal has repeatedly played down the prospect of winning all four men’s majors in a calendar year, with Rod Laver the last to do so all the way back in 1969.

While the calendar Grand Slam remains on the cards, Moya warned Nadal is only halfway to completing the illustrious haul as the Spaniard heads to Wimbledon.

“It is a realistic goal, right now he is the only one that can achieve it this year, ”  Moya told Eurosport Spain.

“It is the first time in his career that he is in a position to achieve it, but we see it as something far away, it is only halfway.

“At the moment he doesn’t  lose sleep, as a team few things keep us up at night and this is not one of them.

“We have to go little by little, it is not something that we talk about, it is not a primary objective, although we are not going to give up on it. ”

Nadal revealed in  Paris that he intended to have  radiofrequency injections to boost his hopes of competing  at the All England Club, and he has undergone  two courses associated with said treatment.

Wimbledon starts on Monday, a tournament that Nadal has won in 2008 and 2010, but he has not played there since reaching the semi-finals in 2019.

Nadal ramped up his preparations with a week training on grass in Mallorca prior to playing an invitation event  at Hurlingham Club this week, where he faced Stan Wawrinka on Wednesday.

“We had a pretty good week of training in Mallorca, although the grass there is a bit different from London, maybe that’s  why it’s taking a little bit for him to adapt to the grass in England, ” Moya added.

“Right now, the important thing is that he spends time on the court and that his foot is fine, little by little he will pick up the pace, we also hope that the draw will help, especially in the first games.

“At Wimbledon there can always be more surprises. Regardless of the player you get in those first rounds, what is dangerous is the type of opponent you get, you have to be careful with the sluggers.

“Now he has two important exhibition matches, my confidence in him for Wimbledon remains the highest. He is perfectly suited to grass. ”