Investing In The Future – IAMAW – GOIAM 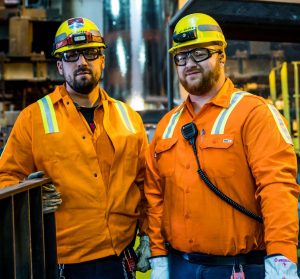 Investing In The Future – IAMAW – GOIAM

You can find the high-quality steel produced by these members in your cars, home appliances, heating ventilation, air conditioning systems, and culverts throughout your cities. Steel has been made at this facility for over 120 years.

One of the buildings at this facility is the Cliffs’ Maintenance Training Center.

On this morning, the training center is abuzz as members of IAM Local 1943 participate in different classes throughout the building, learning and honing their maintenance skills. The welding lab is nearly half full of people practicing their welding, burning, and grinding under the instruction of the welding instructor and Local 1943 member Bruce Gibbs.

How the Program Works

“You start out in math, then as long as you pass your math test, you get to move on to what they call skills and trade,” said seven-year member and Journeyman Jessica Pabst. “They have to make sure everybody knows how to use power tools, hand tools, tap and dye, burning, etc. Just general simple maintenance things to get the basics.”

The main structure of the class consists of 1,620 hours of class and lab work, and 2,000 hours of on-the-job training alongside a journeyman. The entire training takes 18 to 20 months to finish. Upon completion, each apprentice becomes a certified journeyman maintenance mechanic through the state of Ohio.

“They have to pass all the classes with a 70% or higher throughout each grading period and achieve those hours in order to be considered a finished Journeyman under our standards,” said IAM Local 1943 Educator and Training Director Willie Parman.

The apprenticeship program at Cliffs Middletown Works is instructed by union journeymen with decades of experience in the plant. From left to right: Bruce Gibbs, Steve Poff, Todd Cramer, John Giltrow, and Chad Johnson.

The training center has labs set up with the exact same equipment as the apprentices will be working on in the mill.

“It’s amazing that in a controlled environment we can literally simulate every issue that you would have on a direct current crane board in the mill without actually being 50 feet up in a crane or having to disrupt production,” said eight-year member and South Processing Maintenance Apprentice Jeff Esposito.

“It’s like an industrial college campus,” said Parman. “It’s went from just bare floors and old machines to a state-of-the-art training center. I took my pipe fitting class upstairs, it was in the old rigging shop lunchroom. You could look out over the building from that catwalk up there and there was nothing in here. It had been sitting empty for years. Cleveland-Cliffs is going to invest in a roof for the whole facility.”

The training center has quite a few different classes being taught in addition to the apprenticeship program. Current Journeyman is able to refresh their skills by taking “a la carte” classes for pipefitting, pneumatic training, rigging basics and safety, electric and hydraulic brake training, fluid power training, coupling basics, and installation, and many other subjects.

Another impressive aspect of the training program developed by Local 1943 and Cliffs is that all training is done during normal working hours and the apprentices are paid their wage rate, whether in the classroom or performing on-the-job training.

The program allows members to advance in their careers, without sacrificing their much-limited time with their families.

“You know, working the way that we do, around the clock with rotating shifts, it’s very difficult to take any kind of higher-level education, apprenticeship, or anything like that,” said Cold Mill Maintenance Apprentice Shane Claxton, who has been at Middletown Works for 20 years. “But the way they’re doing it now, they offer an 18-month class and they pay us to be here Monday through Friday. It’s really amazing what they’ve put together for us.”

One thing that separates this program from others is that all the classes are instructed by a union Journeyman who has worked in the Middletown Works steel mill for decades and bring a wealth of knowledge to the table. The six union instructors have a combined total of over 175 years of experience working in the plant.

Learning from highly experienced, fellow union members is something many of the apprentices say makes this program special.

“They’re giving you their insider info. If you’re willing to listen, they’re going to talk,” said 11-year member and South Processing Maintenance Apprentice Cody Lay. “And then with the on-the-job training, the older guys that have 30 and 40 years have taken me under their wing and they’ll sit down and give you the college education on an individual piece of equipment throughout the plant that you can’t get anywhere else.”

“These are some of the best instructors, and the best maintenance guys in the mill,” said Esposito. “That has really been my favorite part, the opportunity to learn from guys that really know how this mill runs. You can’t put a value on learning from the guys that we learned from over here.”

The morning sun shines through the building that houses the steelmaking and casting operations at Cleveland-Cliffs Middletown Works. The facility can produce 3 million net tons of raw steel annually.

“All of them are great,” said Hall. “They made sure that you’re not left behind make sure everyone understands what’s going on. They all have a positive attitude and a great sense of humor. They make it fun for you as well, and that is important too.”

One of those instructors is third-generation Middletown Works employee John Giltrow. The Pipefitting instructor is No. 6 on the seniority list and could be working just about any job in the mill.

“I think I just got to the point in my career where I just felt like, you know, it was time for me to give back a little bit more than what I was doing on my

old job,” said Giltrow. “I’m going to be relying on these guys for my retirement and my pensions and stuff like that, you know, so we want to keep these doors open.”

Passing on that knowledge has been some of the most rewarding work he has done in his 43 years in the mill.

“I’ve seen a lot of things, and picked up a lot of knowledge along the way,” continued Giltrow. “To be able to pass that on to a younger generation of students that are really interested in what you’re doing, and see them really apply themselves and they really pick it up is very satisfying. To see their growth and what they’ve done to get to where they’re at, it brings you satisfaction. It’s great to see their gratitude that they have, it’s very special.”

Just a few short years ago, the building that houses the training center and its high-tech training modules looked much different than it does today.

When the Middletown Works facility was previously owned by AK Steel, there was an apprentice program in place through a local community college. AK ended that program in 2005 and eventually locked out the union workforce in 2006 for more than a year until a new labor agreement was reached.

Upon return from the labor dispute, there was no maintenance training at all. Local leadership knew this was not sustainable.

“There was no pathway into maintenance, it was kind of all over the place,” said Local 1943 President and Directing

Business Representative Neil Douglas. “They would accept some people into maintenance based on past qualifications and some they wouldn’t. It was chaotic at best and they were contracting out a lot of the work here. And frankly, I thought the company’s [AK Steel’s] position was just to do away with any kind of skilled trades by attrition.”

In 2011, the Local 1943 membership ratified a new contract that included 10 cents for every hour worked by all members to go into a training fund and could only be used by mutual agreement for training.

“We came back with a plan that partnered up again with a local community college,” continued Douglas. “It wasn’t exactly the ideal training we were looking for, but it was better than having nothing. Even the company started to recognize that it wasn’t adequate for what we do out here in the steel mill. In the next negotiations, we expanded on it and gradually got to the point through discussions, even outside of negotiations to partner up with the company and grow it.”

It is worth noting that this all transpired while Middletown Works was owned by AK Steel. In 2020, AK Steel was acquired by Cleveland-Cliffs, now the largest flat-rolled steel producer in North America.

Since the acquisition, the relationship between the union and the company has flourished, and so has the Apprenticeship Training Program. Cliffs are not only investing in the program but also in its workforce.

“It speaks volumes,” said Hall, “They buy thousands of dollars worth of equipment just to educate us and get us to the best of our abilities to do our job better job for them. I think that is phenomenal.”

“You have a lot of people, for the company and the union, that worked really hard to give us this opportunity,” said Esposito. “They’ve worked together to make their employees and our members more valuable. It’s an amazing thing how they did this and it’s something you don’t often see. It’s a good example of how things can be when the company works with you and vice versa.”

“You’re not going to find this training anywhere, really,” said 18-year member and Zinc Grip Department Maintenance Apprentice Brian Sorrell. “I hired in 2003, and this is something that I’m not used to, we’ve always butted heads on pretty much every issue. And now it’s so much better than Cliffs has come on board. I mean, they’ve dumped so much money into this and they’re backing this program. It’s great. Everyone’s kind of working together and we are all going to reap the benefits of all this.”

Local 1943 members Carlos Hall and Justin Fletcher make repairs to the hood above the steelmaking vessel at Cliffs Middletown Works. Both members were part of the latest class of apprentices to graduate from the program.

“The training program that has been built at Middletown Works through the collaboration of Local 1943 and Cliffs is outstanding,” said IAM Eastern Territory General Vice President David Sullivan. “They both are making an investment in the mill’s greatest resource, its workers.

I couldn’t be more proud of the foresight of the leadership and the progress that has been made there.”

Something many of the apprentices says they are looking forward to is helping the next generation of students get to their journeyman status.

“I’m a huge supporter of recruiting people along the way,” said Sorrell. “I find people that are in the production and I say, ‘Hey, the next program that comes available, you need to take advantage of that.’ And there’s always the, ‘Well, I’m not very good at math, I haven’t been in school forever, I don’t know how to do this.’ I tell them they would teach you everything you need to know.”

By the end of the summer of 2022, nearly 100 apprentices will have graduated from the program. In addition, more than 400 members have benefited from the “a-la-carte” maintenance classes since their inception.

At a plant that has been making steel for over 120 years, IAM Local 1943 has worked with Cleveland-Cliffs to invest in the workforce and ensure they can continue making it for 120 more.