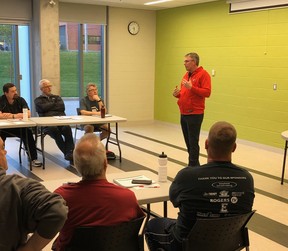 This time female hockey fans in Owen Sound are getting a shot at hitting the gym and working out like their favourite on-ice athletes as the Hockey Fans in Training program returns to the Scenic City.

The 12-week Hockey Fans in Training (Hockey FIT) program offered by the YMCA in partnership with researchers from Western University and the Owen Sound Attack was first offered to male hockey fans ages 35 to 60 in 2019.

Now, the Hockey FIT workout program is returning for two sessions featuring graduates of the 2019 class as well as a new all-female class for fans ages 18 and older.

There are still spots open in the women’s class. Interested hockey fans can visit www. hockeyfansintraining.org for more information.

Trevor Klerks coaches athletes through the free program at the Y in Owen Sound and said the workout is a great way for those who watch hockey and enjoy the sport to gain insight into how high-performance athletes train, and how anyone can benefit from a sport-specific training regime.

“We’ll have agility courses they can go through with hockey sticks, we’ll have specific exercises hockey players often do, other than that a push-up is a push-up whether it’s you or a hockey player,” Klerks said. “It’s all going to benefit you in the end.”

Those in the program are also taught to make healthier diet choices, portion control, grocery store pitfalls, and code-breaking the nutritional information listed on pre-packaged foods as part of their weekly workout sessions.

As an added bonus, the local Hockey FIT program has partnered with the Owen Sound Attack granting participants an opportunity to meet players and coaches and get an inside look behind the scenes at how an Ontario Hockey League team stays in shape.

The first Hockey Fans in Training program was led by a team of health and fitness experts from Western University in London, Ont., in 2015. Since then, the program has rolled out to junior hockey cities across the country. Originally geared toward men, the program is now expanding to include female hockey fans.

In 2015, researchers teamed up with the London Knights and Sarnia Sting and provided trained coaches to lead 80 middle-aged men through weekly 90-minute sessions over the course of 12 weeks.

The idea was to appeal to a group of sports fans who may typically be overweight or have sedentary lifestyles and target them with a workout program tailored to their favourite pastimes – watching and enjoying hockey.

The program also relies on sports fans working together as part of a team to promote an engaging and proactive way to sustain lifestyle changes.

Researchers found those who participated in the Hockey FIT program lost weight, increased activity and improved other health outcomes such as lowering blood pressure.

The London study reported an average weight loss of 3.6 kilograms that was sustained 12 months after the HFIT program ended.

Participants in the New Brunswick program realized a drop in body mass index of two points (from 32.3 to 30.3), a 3.5 cm decrease in their waistline and a 1.9 per cent reduction in fat mass. They also improved their aerobic fitness.