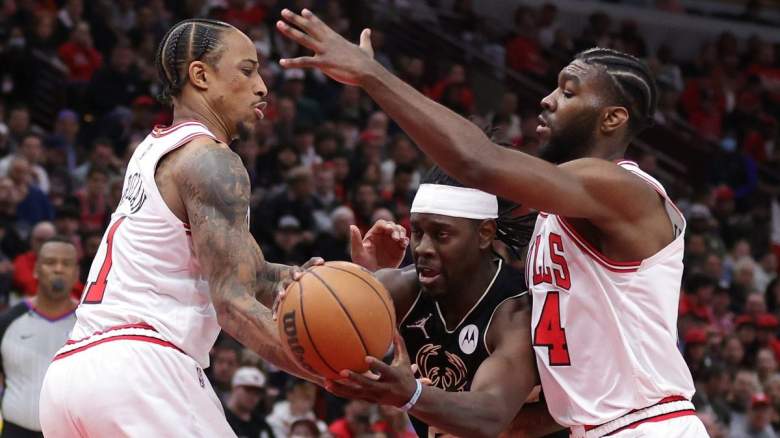 Heading into his third year, Chicago Bulls forward Patrick Williams knows what he has to do. The Bulls have refused to include him in deals for Rudy Gobert or Jerami Grant in the past, even though some feel he is a necessary inclusion to grab the latter.

The Athletic’s Darnell Mayberry and Tony Jones, for example, explain that Gobert would put the Bulls into the upper echelon of teams in the East.

It speaks to the front office’s opinion of Williams’ talent level.

Williams sounds like he is ready to take the next step in his development. To this point, the only consistent thing in his career has been disruption. He is looking to change that and become the player he knows he can be.

The former fourth-overall pick out of Florida State was a guest on the June 16 episode of Bulls commentator Stacey King’s “Gimme The Hot Sauce” podcast. He joined from California where he recently flew to meet up and train with teammate DeMar DeRozan.

DeRozan had warned Williams at the end of the season to prepare for a “summer from hell” calling the young forward his “main victim”.

Asked by co-host, Mark Schanowski, Williams laid out what the workouts look like.

“We have 5 a.m. lift. And the lift is…it’s a different lift than any lift I’ve had in a while. It’s more of…you do have weights in there. But it’s a lot of body weight. It’s a lot of movements that challenge your core…And then, right after the lift, we go on the court for about…45 [minutes] to an hour with HandleLife, Dribble2Much out here in L.A. And then, for the most part, we’re done until the afternoon. We’ll go back to get more shots up, just to get more reps.”

Williams is feeling the intended effects of the workouts.

Consistency is a key for Williams.

Talent has never been the question for the 6-foot-7 Williams. It has always been consistency and aggression. He mentioned being more consistent and picking his spots better in his exit interview.

Williams reiterated that point to the panel.

“For me, it’s just kind of picking my spots. Knowing when and where my spots are…everybody around the team is just telling me to stay aggressive, be aggressive, and try to…make plays. Whether it’s for myself or for teammates, on both ends….it’s just a matter of focusing on it in the game.”

He sees progress, though, he understands it’s up to him to reach his goals.

“I think I kind of see it coming a little bit more and more. But it’s on me if I want to be who I want to be, that’s something that has to happen. So, the pressure’s on me.”

Williams has reason to believe the game is slowing down.

His 35-point explosion in the regular-season finale was an impressive display. He also averaged 21.5 points and 5.5 rebounds while shooting 61.5% from the floor and 53.8% from deep over the final two playoff games against the Milwaukee Bucks.

Williams averaged 9.0 points and 4.1 boards during the regular season.

But he appeared in just 12 games after undergoing wrist surgery on October 31, 2021, per NBC Sports Chicago’s Rob Schaefer.

Williams appeared in just 17 games all season. But he used his time off to try to improve on the mental side of the game. That is something that can take an inordinate amount of time for young players.

“Started watching film a little bit more. Started just thinking the game a little bit more. Picking guys’ brains. I would sit next to different people on the bench almost every game…Just picking their brains, try to see what they see. And I think, coming back, that definitely helped me…The game kind of slowed down for me there towards the end.”

Can he build off of his finish to the regular and postseason? Williams certainly thinks so.

“I have to. Not only me but the rest of the guys on the team. A lot of guys before this year didn’t have any playoff experience. Now we have that, now we can build off of that…I think definitely having one series under your belt definitely helps.”

As for his time with DeRozan, Williams had high praise for the veteran’s efforts to keep himself in top form.

“It’s just been fun for me just to be around him…see his regimen, his schedule, his routine. And what got him to be who he is.”

There might not be a better teacher for the youngster when it comes to consistency and longevity in the NBA than DeRozan.

While he has not enjoyed the early-morning aspect of DeRozan’s workouts, Williams does have an appreciation for the approach. If that sticks, King points out, he will soon be the one inviting players out to workout with him.

Williams also agreed with King on what an asset his passing ability can be in pushing the ball up the floor off of a miss.

He sounds like he is ready to deliver on all of that promise.

The crew also got into Williams’ upbringing in Charlotte, North Carolina.

Perhaps the biggest basketball takeaway, though, is Williams understanding what is needed from him. As the Chicago Sun-Times’ Joe Cowley writes, the Bulls need less talk and more action (come next season) from their talented young forward.