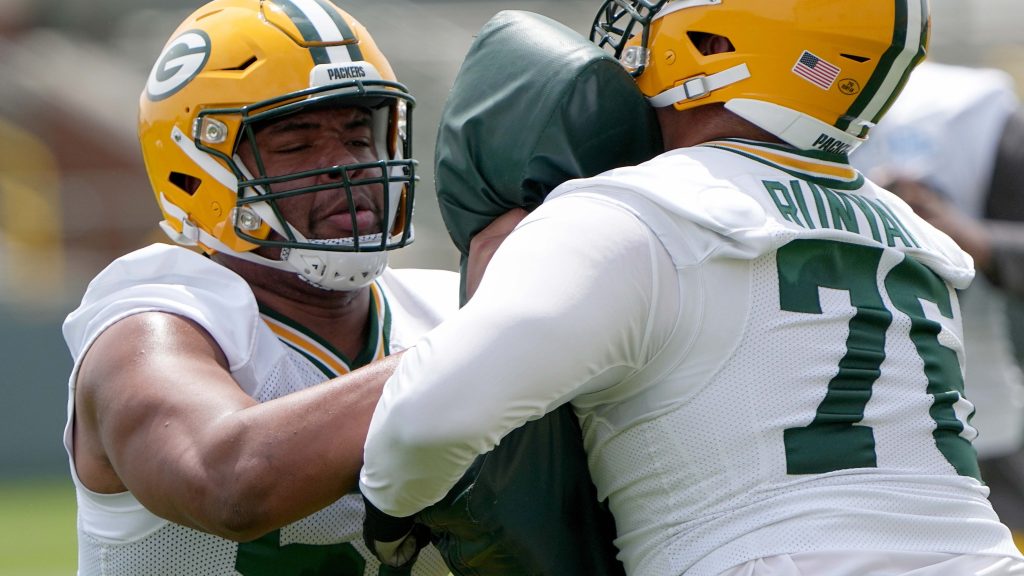 The offensive line might be the most fascinating position group for the Green Bay Packers entering training camp. Aaron Rodgers isn’t concerned, but there is a lot to figure out over the next few months. Two big departures, two major injuries, several young returning starters and three rookie draft picks provide plenty to watch as offensive coordinator Adam Stenavich and coach Matt LaFleur attempt to find the best starting five for Week 1.

Here’s a full breakdown with analysis of every position along the offensive line:

The Packers’ best two options at left tackle are David Bakhtiari and Elgton Jenkins, who are both recovering from ACL injuries. Bakhtiari’s return timeline is uncertain; Jenkins injured his ACL in Week 11 last year and may not be ready for the start of the season. Ideally, Bakhtiari will return to start training camp and resume playing the left tackle position at an All-Pro level. If he’s not ready, and Jenkins starts the season on the PUP list, the Packers would have to call on Yosh Nijman – who started eight games there in 2021 – to be the Week 1 starter. Nijman proved capable at the position and is now entering his fourth season in Green Bay, but getting Bakhtiari back and close to 100 percent is imperative.

There doesn’t appear to be much mystery here. Jon Runyan Jr. is coming off an encouraging second season in which he played over 1,000 snaps at left guard and was highly effective as a pass-blocker. There’s room to grow here, especially in the run game, but Runyan looks like a multi-year starter who could hold down the left guard spot for the foreseeable future. It would likely take an injury or a huge summer from one of the rookies to prevent Runyan from starting at left guard in Week 1.

Like left guard, the starter at center looks easy to predict with Josh Myers, a second-round pick in 2021, coming back for his second season after winning the starting job as a rookie. He missed 11 games with a knee injury, but his six games as a starter in 2021 showed a big, athletic and smart player who could take a big jump as a second-year player and become one of the NFL’s more capable centers. The Packers have as many as four backups behind Myers: Jake Hanson, Michal Menet, fourth-round pick Zach Tom and undrafted rookie Cole Schneider. After losing Lucas Patrick, the Packers need training camp to find the backup center.

This could be the most competitive position during camp. Royce Newman started 16 of 17 games at right guard as a rookie in 2021, but he’ll have to win the job against more competition in 2022. Third-round pick Sean Rhyan and fourth-round pick Zach Tom should both get a chance to compete here. Rhyan, with his combination of size and power, could give Newman a real run during camp. Aaron Rodgers said Newman added weight in his second season and looks better prepared to play inside in 2022. The Packers may need Newman to play right tackle at some point, so Jake Hanson (another option) or one of the rookies needs to emerge as a starting-level player right away.

If both David Bakhtiari and Elgton Jenkins return healthy at some point during the season, Jenkins would be the expected starter at right tackle. Bakhtiari, a five-time All-Pro, and Jenkins, who excelled while playing left tackle last season, could be an elite tackle combination. But figuring out the starter at right tackle will be a priority while Jenkins recovers. Yosh Nijman is one option if Bakhtiari is back as the Week 1 starter on the left side. Cole Van Lanen, a sixth-round pick last year, received playing time on the right side during the offseason workout program. Royce Newman, who played right tackle in college, is another option. It’s even possible one of the rookies – who all played left tackle during their collegiate careers – could win the job. The right side of the offensive line will be in the spotlight this summer.