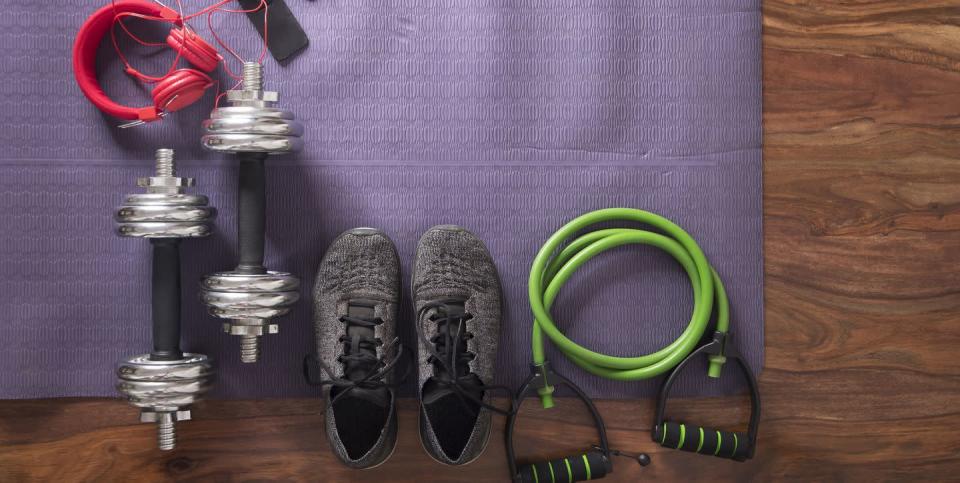 Strength training for runners is a vital piece of the puzzle. Adding tempo runs, long runs, and speedwork to your routine will help build speed and efficiency, but strength training is often the element to take runners to the next level. ‘Strength work accomplishes three goals for runners: it prevents injuries by strengthening muscles and connective tissues; it helps you run faster by boosting neuromuscular coordination and power; and it improves your running economy by encouraging coordination and stride efficiency,’ says Jason Fitzgerald, running coach and founder of Strength Running.

Many runners fear that strength training will build bulky muscle, which will slow you down. But unless you’re lifting very frequently and eating tons of extra calories, you’re unlikely to put on weight that would impair your running, explains Joe Holder, a Nike+ Run Club coach. ‘I remember a quote from a strength coach who said, “There are no weak fast runners”,’ says Fitzgerald.

What does running strength training involve?

Focus on lifting, not on raising your heart rate. Many runners turn their session into a metabolic workout by including too much cardio – think CrossFit workouts or circuit-based fitness classes, says Fitzgerald. But runners get enough cardio. Instead, they should focus on gaining strength and power. Fitzgerald recommends focusing on relatively heavy weights for a moderate number of repetitions, with full recovery. You can lift weight at the gym, or at home with a few pieces of home gym equipment.

Focus on working your entire body; you’ll get the most bang for your buck if you emphasise mostly compound exercises – those that involve multiple joints and muscle groups, such as lunges, squats, rows or dead lifts –rather than isolation exercises, which involve just one joint and one major muscle group, such as a biceps curl or hamstring curl. ‘The goal is to get used to controlling your weight through multiple planes and increasing the level of strength proficiency and body awareness, which will lead to increased mobility, balance and speed,’ says Holder.

It’s also worth concentrating on single-leg exercises, such as single-leg deadlifts, Bulgarian split squats and lunges, as this will help to iron out any imbalances (most of use have one leg that’s slightly stronger than the other). This lower-body workout is a good place to start.

Don’t forget that your own body serves as weight, too. Bridges and planks are excellent exercises – they target areas where weaknesses could lead to increased risk of injury, such as the glutes, hips and core. So if picking up a barbell or dumbbells is a big stretch for you, ditching the weights and adding body-weight exercises instead can still build strength while you master proper form.

Train for strength, not gains

As a runner, train for strength and power, not to bulk up with massive muscles. Choose your weights and reps wisely if you want to get stronger but not necessarily bigger. ‘Runners should be lifting heavy,’ says Brad Schoenfeld a strength and conditioning specialist and associate professor of exercise science at Lehman College in New York, US. ‘Volume builds muscle, whereas strength is maximised by heavy loads.’

A strength-training programme should be periodised like running, explains Fitzgerald. ‘At the beginning, focus on three sets of 10 reps, which is a fairly basic set and rep scheme, building up movement capacity and getting more efficient with using moderate weight,’ he says. ‘Then you can add on weight, periodising appropriately, until you eventually get into power-based moves or Olympic lifts, where the reps come down and sets increase to something like two to five reps for four or five sets.’

How much strength training do runners need to do?

Thankfully, not too much. Most coaches would recommend two or three sessions a week. But if you’re seriously pushed for time, there’s some evidence to suggest just one 20-minute strength training session per week can be effective in building and then maintaining strength. The study looked at a Dutch personal training company, Fit20, whose ethos is “personal training in 20 minutes per week”. Said training involves six exercises: chest press, pull down, back extension, leg press, abdominal flexion, and either hip abduction or abduction (but you could sub in your own exercises here). The key thing is the level of resistance: you need to choose a weight where you can only mange four to six reps. Rest between the exercises is typically about 20 seconds.

How heavy is heavy enough?

One important consideration is to not allow weight training to add so much stress to your body that you get injured. ‘Runners tend to be type A– we want to feel the burn – which is why it’s typical for us to sometimes run too fast or too long,’ says Fitzgerald. ‘But that also means that we can go too hard in the weights room.’

Before you add any resistance to an exercise, make sure you master perfect form with your own bodyweight. If you’re just starting out in the gym weights room, focus on these four pointers to help you choose how much weight to add:

You can increase the weight every two weeks, similar to the way you increase your running mileage in a training plan. By month two or three, you should be performing fewer reps and more sets, with heavier weights.

Or try this trick from Schoenfeld: think of the load as a type of run. If an easy jog is a five on the exertion scale, and 10 is an all-out sprint, you want to be lifting at an eight or nine – like a fast run, but not quite a sprint. ‘The last rep shouldn’t be easy. You should be some what struggling,’ he says.

After each set, rest for two to three minutes to fully recover. Shorter rest periods, which keep your heart rate up, will affect your ability to heft those heavy loads.

Incorporate lifting into your training schedule once or twice a week. As for how to schedule it? Consider how intense your runs are on each day when determining how to place strength training around them.

Running at maximal effort could be impaired for up to 48 hours after lower-body resistance training, says Kenji Doma, a sports and exercise scientist and researcher at James Cook University in Queensland, Australia. So you may want to schedule an intense running workout at least two days after your strength training.

For those accustomed to resistance training, running performance at lower intensities is typically not affected by lifting, so if you need to double up on an easy run and a leg workout the same day, you should be OK – as long as there are at least nine hours between the two.

On days when you run and lift weights (and you also intend to run again the next day), it’s best to run first: Doma has found that lower-bodyweight workouts six hours before running at moderate to high intensities have carryover effects of fatigue the next day that are more significant than in the reverse scenario.